My Cat Has a Foot Fetish

He doesn't care if it's passe, if it's yesterday's obsession; he's a cat and he just can't help himself.

It’s a good thing that The Creator, whoever or whatever she is, installed those filters between thought and behavior in humans. We downright depend on them. Cats, on the other hand, benefit from having none.

Picture this: My fiancée’s longtime friend Erin came to town last week and stayed with us while she attended a conference in San Francisco. I’m always glad to see Erin. She’s like family (or, NOT like family, depending on your family). Erin and Daphne walked in, and after a few minutes Erin took off her shoes and sat down at our dining room table. Immediately I fell to the ground and sniffed her toes. She patted me on the head. I rubbed my face on her shins so later I would recognize my own smell on her. Then I huffed her feet some more, this time really getting into it. 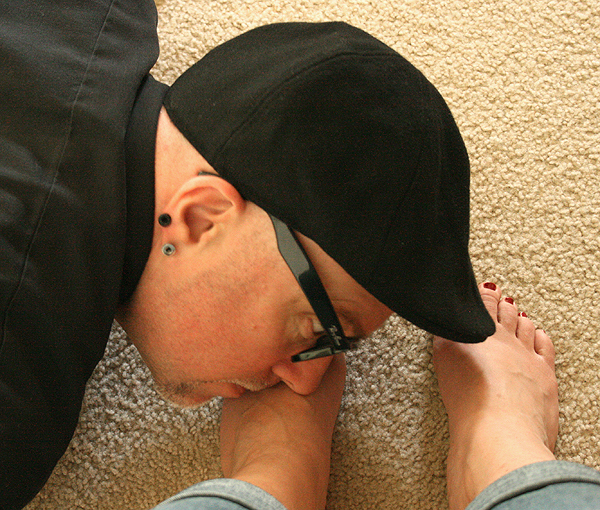 Erin got up (taking care to avoid kicking my face) and walked to the kitchen to get a snack and talk to Daphne. I followed her on all fours. I continued to sniff her toes, touching my nose to her all the way past her ankles, taking in the generous servings of airborne microbes emanating from these glorious “back paws.” Erin gently nudged me away with a laugh, petting me, but insisting that I go elsewhere. So I followed my nose to her still-warm shoes and continued to inhale deeply. 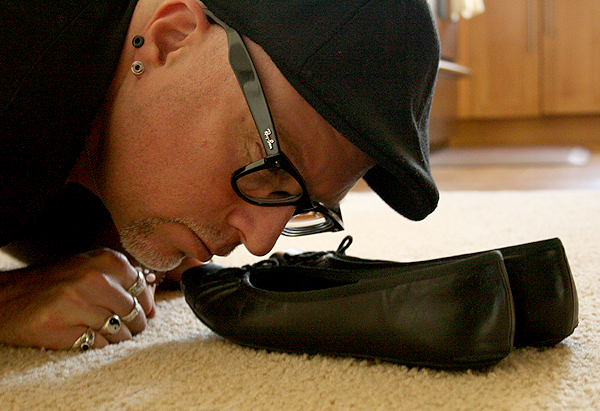 She and Daphne looked over at me and laughed, lovingly, as they continued their conversation. After a few minutes I found a spot on the rug and had a nap.

“Hey, Cat Dandy, did that really happen — and can I come visit you?”

Of course it didn’t happen! (We can talk later about a visit.)

Which is to say, it DID happen, except the sniffer was Thomas, my brown tabby of a House Tiger, not me. Had I been the sniffer, Erin would have collected her shoes and assertively asked Daphne for a lodging recommendation as she stumbled out the door in reverse, not caring what she left behind. (“Watch that threshold!”) 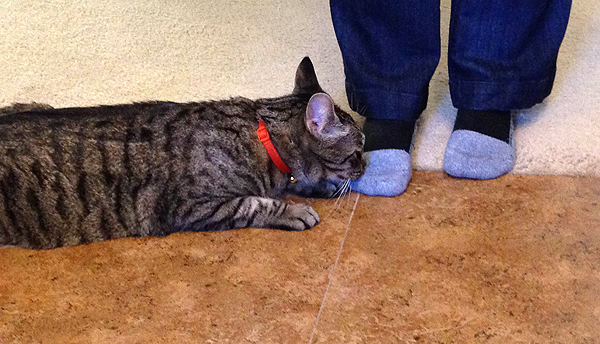 Even if I’d wanted to act out the scenario described above, I wouldn’t have (not without a thorough “boundary talk,” anyway). That’s because I’m a human, and I have filters. These filters keep us from doing or saying certain things that might cause more trouble than they’re worth, or things that cross our minds but that we don’t really want to do.

This does not apply to a cat. Thomas did all that because he has no filters.

It says so right here in the Feline Service Manual: Cat = no filters.

He wants what he wants, and he goes after it. What was the result? Love, physical affection, and a couple of laughs. And Erin was far from the first. Thomas has huffed my feet seconds after their release from boots or shoes more times than I can count. He does the same with Daphne. He’ll do it to anyone who walks through the front door. 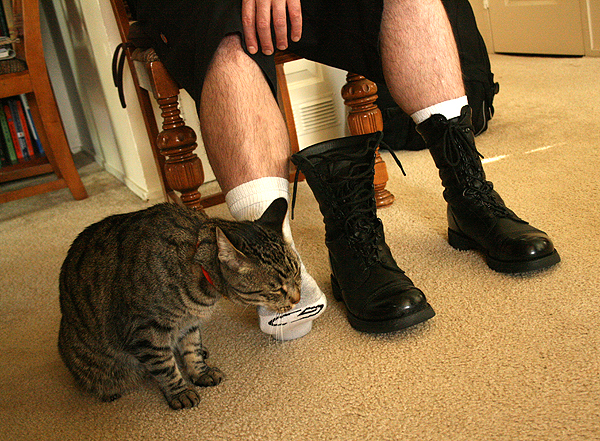 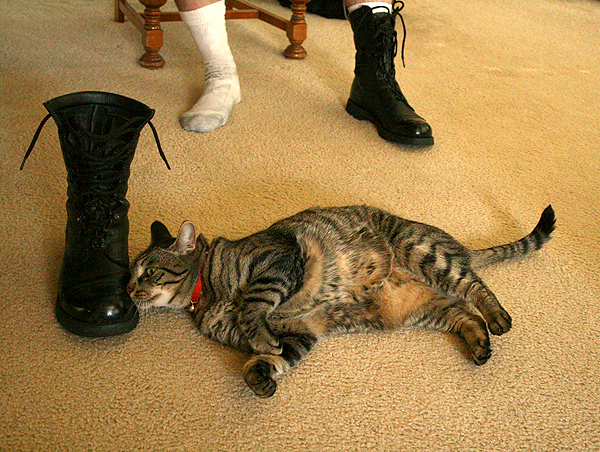 Afterward, he’ll often do follow-up olfactory investigation on footwear. With mine, it’s easy: I keep my most-worn shoes and boots in a lineup near the front door — it’s my morning “staging area.”

This is an all-you-can-sniff “salad bar” of olfactory delight for Thomas.

In other words: My cat has a foot fetish. He can’t hide it. He can’t deny it. And it’s okay. 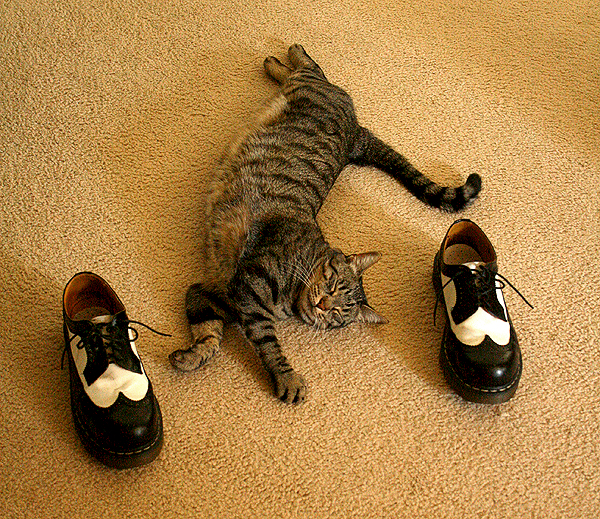 When I first became aware of this obsession, part of me wanted to say, “Thomas, the foot-fetish thing is so 1990s predictable, you know what I mean?” Then I realized Thomas wasn’t alive in the 1990s. Also: He’s a cat!

Cats do this. Those little microbes on our feet and footwear tell them all kinds of things about who we are and where we’ve been. To a cat, a stinky foot is love multiplied. It’s communion. It’s intimate embrace through chemical exchange. (Also: He’s a cat!) 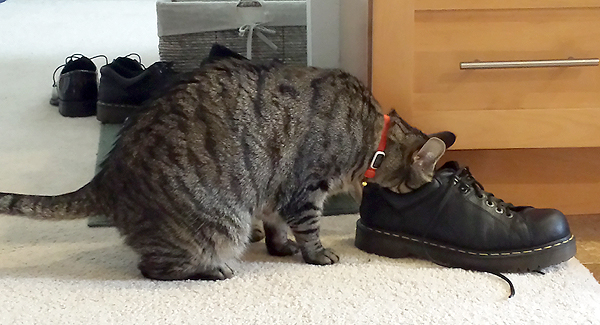 What’s your experience? Does your cat have a foot fetish? Does he or she huff things that we humans might consider icky? What might Alfred Kinsey say about cats and feet? Were you alive in the 1990s? Tell me in the comments.

Cat Dandy is not at liberty to discuss his own kinks via this channel: