Next on The Scoop: Update on Earless Ernie

Bakersfield Cat Rescued after a Week in a 70-ft Tree

Buddy the Cat, a resident of Bakersfield CA, was rescued Saturday from seven days spent in a tree, which he climbed after being chased by a dog. Harrassed by crows and outspoken in his displeasure at his predicament, Buddy was hauled down successfully by Robert Karr, a neighbor and professional tree trimmer who fearlessly scaled the tall tree and accomplished what firefighters and the owner’s sister had been unable to do: bring Buddy home. For his trouble, Buddy gave Karr an enthusiastic lick, but unfortunately, his teeth got in the way and broke the skin. The video is worth watching if only to hear poor Buddy, who I think has the makings of a champion hog caller at the next Kern County Fair. 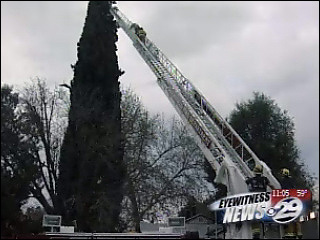 Last Wednesday, firefighters came to the site (above) to rescue cat owner Cheryl Newton’s sister from the tree. She had tried to rescue Buddy but was thwarted when the tree began swaying in high winds and her arms and legs cramped up. On Saturday, the fire department returned in an attempt to rescue Buddy, but their ladders were too short. Cheryl said shes had Buddy since he was 2 days old. He was abandoned in August 2007 and she took him in and bottle-fed him.

Posted in Cats in Predicaments, Humor,