Next on The Scoop: Is Your Cat Peeing Blood? Here’s What Could Be at Play
Catster Magazine 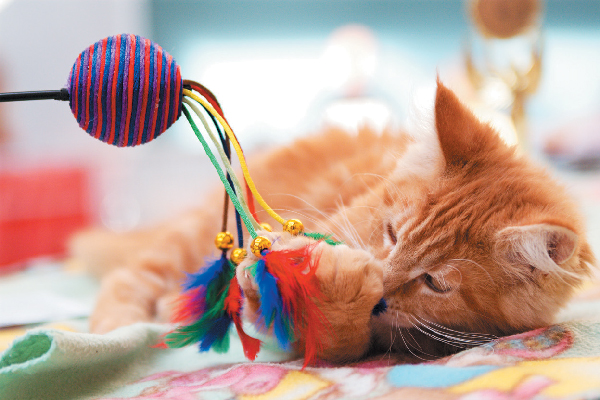 Wondering How to Play With a Cat? Here’s How at Every Age

At just about any age, a cat is a born predator with an amazing ability to seek and pounce. Let's look at how to play with a cat appropriately based on age.

Play is important throughout the lifetime of a cat for his well-being, from allowing him to pounce to offering mental stimulation and physical exercise. Let’s take a closer look at how to play with a cat.

Let the play begin with kittens Kittens are born pretty helpless, fully dependent on their mothers. At first their only focus is staying warm, finding their mother’s teats and sleeping. Their mother’s licking keeps them clean but also stimulates them to urinate and defecate.

Cute — but helpless — and play isn’t even a real possibility until their senses better develop. They don’t begin walking until around 17 days, but it takes around a week longer for most to really get their balance. At around the same time teeth begin to erupt. And soon thereafter, at around 4 weeks, kittens do begin to interact with one another, which soon leads to play.

How to play with a cat appropriately starts in kittenhood. Play at this age is important for many reasons. Kittens learn bite inhibition. If they bite down too hard on a littermate, a yelp is instantly heard and play ceases. Mom may even intercede. Kittens instantly learn to constrain bites in play and perhaps also learn something about the power of a bite.

With play, kittens practice being cats. They jump and pounce on one another. Pouncing is biologically built into the feline nervous system. Cats are born with the hard wiring in their nervous system to instantly tell their brain, “I’ve got something in my paws.”

They use all their senses — hearing, sight and smell — in conjunction with their marvelous whiskers. Though this system doesn’t come with written directions, it’s through practice that kittens gain understanding of how it all works.

Kittens also develop their renowned agility and sense of balance through play. Though clumsy at first, they’re presumably having fun, but simultaneously developing coordination.

Kittens live in three gears: Eating, wildly running amok (including play) or sleeping. The goal is to redirect wildly running amok into appropriate play. Sometimes another household pet can help you out with this. One reason (aside from companionship) of adopting a pair of littermate kittens is so they can tire themselves out with play.

An adult cat or cats in the home may participate, depending on the personality of the cat or cats. Dogs might even indulge kittens. However, it’s important for human family members to also interact with play, which supports cementing the human/animal bond.

The trick is for how to play with a cat the right way is to instruct kitty in the appropriate kind of play. Using hands and fingers, even if under a blanket, is never a good idea. It might be cute to watch a tiny 5-month-old “tiger” pounce on the blanket with your fingers tantalizing the kitty. However, it’s sure not cute when a 5-year-old cat continues to think hands are to bite.

Kittens like movement (especially unpredictable) and sound, and may also be excited by texture. There are many commercially available cat toys that fall into these categories. Remember, a plastic top from a milk carton or a ping-pong ball can be as much fun to a kitten as a toy you spend $30 on.

Toy dangers to watch for

Make sure the toys you get don’t scare your cat. Photography ©Mark Rogers.

Like puppies, kitties may ingest toys when given an opportunity. For example, if you use yarn or string to play with — and then leave out the yarn or string when you depart, it’s a toy that might be swallowed, and the result can be life-threatening.

Also, be sure the toy isn’t scary. A toy that’s twice the size of most 5-month-old kittens and makes high-pitched or scary sounds might not be a good idea. And while kittens and cats typically enjoy unpredictable movements, a toy that might actually run over a kitten should be reconsidered. You don’t want to terrify your cat. Just because a toy is available doesn’t always mean that it’s a good choice.

How to play with a cat that is aging

How to play with an aging cat is different than how to play with a cat who’s younger. As cats age, they may be less inclined to interact — so don’t wait for an invitation. Take out the interactive toy with feathers to entice your aging cat. Movement is important to maintain that agility (physical and mental alertness) and to keep aging cats limber.

Some elderly cats appear to have found the fountain of youth and play nearly as much as they did as a kitten. Their secret is in genetics, regular preventive veterinary care, good luck and a lifetime of play.

Other cats — not surprisingly — slow down significantly, which is normal. Even a few moments of gentle daily play makes a difference. Expectations are, of course, adjusted depending on any physical limitations on an individual older cat, but play is a good thing.

Cats are smart. They’re not as interested in playing with a mouse toy they’ve “killed” 20 times. You need to constantly rotate toys, revolving in new ones.

Time of play is important

Many Golden Retrievers can fetch a ball for hours. Some cats can fetch too, but no matter what the play activity is, cats prefer multiple shorter sessions. Many cats will tell us when their mood is right for play.

Unfortunately, many cats in America are overweight or obese, which is also related to increased arthritis. It may hurt to play. Movement is likely to be a good thing, but don’t expect an aging, arthritic cat to necessarily play as a kitten.

Research shows that human adults who play games — some physical games as well — into old age are more agile and alert and happier because of social interaction. If this is true for people, why not cats? If your cat doesn’t like one type of toy, move on to another. Photography ©Casey Elise.

All cats are as individual as we are. My sport of choice may be baseball, while others may prefer football. How to play with a cat works the same way. A ping-pong ball bouncing unpredictably in an empty bathtub might be the ultimate game for some, while others prefer the standard feather at the end of a stick. Some cat toys you should try are:

Steve Dale, CABC, certified animal behavior consultant, is host of several pet radio shows, appears on TV and speaks around the world. He’s author/contributor to many books, including The Cat: Clinical Medicine and Management, and board member of the Winn Feline Foundation. Blog: stevedale.tv. 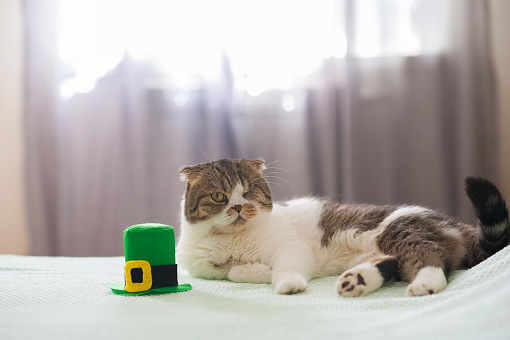 3 comments on “Wondering How to Play With a Cat? Here’s How at Every Age”